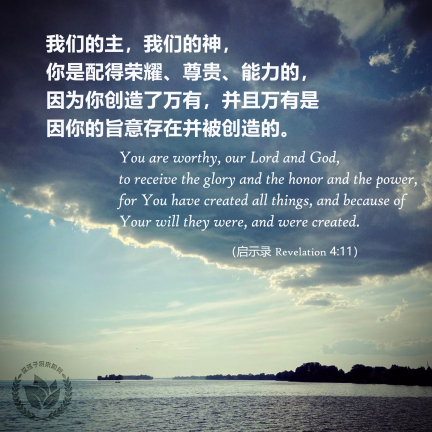 We can know this Creator through His creation and through His creatures. Our God is a God with a will, a purpose, a plan, and an economy. According to His will and plan He created all things. The fact that all things exist and were created is not accidental, arbitrary, or by chance, but rather according to the will of God (Rev. 4:11).

When the parents lead the children to be touched by and to know and appreciate God’s creation, it is good not only for their feeling toward God but also for their healthy growth in all aspects. On holiday trips try to take your children to see and touch God’s creation and teach them to recognize His creation. Thanking, admiring, and praising God’s creation help them to have a heart of discovery, thankfulness, and fineness, which can usher in thanksgiving toward the parents and God who is the source. It can also help in building up proper humanity and family relationships.

Help children to study science, to know God’s creation as well as the laws of His creation, and learn how to discover, know, master, and obey the laws. This helps children to know the moral laws, the law of God, and God Himself as the law of the Spirit of life. To study science will help them to know the laws of nature, and to know the laws of nature helps to know God. Not only are there many laws in nature, but there is also a moral law in man. God gives the law outside through the Bible, and finally God Himself becomes a law, the law of the Spirit of life, which comes into us.

Help children to know the serious consequences of not obeying the laws of God’s creation that help them to develop a heart that respects God. They need to know that we should keep the natural law and the moral law. God has placed in every man a moral law, which is in harmony with the nature of God. If man violates this law, his conscience will not be at peace. Thus, when children know this, they will develop a healthy fear of God.

The theory of evolution believes that a species can evolve into different species, from a lower form to a higher form, such as man evolving from apes. This is a hypothesis that has not yet been and cannot be scientifically proven. This is a bold inference, which is called a hypothesis in science. Scientific research can have many bold hypotheses, but they must be carefully verified, and evidence must be found to prove them. The hypothesis of “pervasive evolution” is that a species can evolve across classes, from lower to higher; however, over the past 160 years since the Origin of Species was published, there is no evidence to confirm this hypothesis.

In fact, the theory of evolution can never be proved, because it believes that cross-species evolution requires millions of years of mutation and evolution. It is impossible to have an experimental environment that allows species to evolve and progress over millions of years, which means that the theory of “pervasive evolution” will never be confirmed by science. It is still only a hypothesis.

Simply put, first, the theory of evolution is not a scientific truth, but only a hypothesis. Second, the theory is a faith and atheism, because it is believed and accepted by faith. In fact, it takes more faith to believe in this theory than it does to believe in the existence of God and His creation. Third, the final conclusion of the theory of evolution as a hypothesis denies not only the existence of God and His creation, but also the meaning and value of human existence.