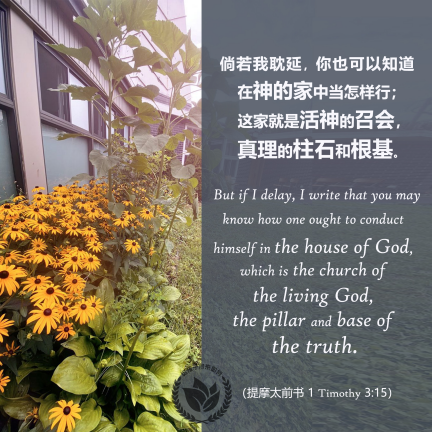 It’s a great blessing to have children grow up in church life!

When my older son was just a month old, we put him in a baby basket and carried it to all kinds of meetings. Later, when my younger son was born, we also carried him in the basket to all kinds of meetings. So, both children grew up in the meetings; they both loved meetings. When they were older, they started asking about the next meeting on the way home, “Is there a meeting tomorrow? Whose house is the meeting at? At that time, the church began to implement the new way, the God-ordained way; not only to go out, but also to invite people in. The specific implementation was “three openings”: open your home, open your kitchen, open your refrigerator, and invite people to your home. Therefore, we have meetings and love feasts at home every week, and every time many brothers and sisters came to our home, our children were very happy. We also often provided hospitalities, and every time we had guests, the children voluntarily made their room available for the guests. If we received one person, they emptied one room and they slept in one room. If we received more people, they would empty both rooms and move themselves to the living room and sleep on the sofa or on the carpet. Not only that, but every year we take our children to conferences, training, and blending abroad, so they not only had a taste of the church life in that locality, but also blended with the saints from all over the world. You can see that this kind of church life enlarges the child’s measure. At that time, we did not have either a TV or any electronic devices in our house. There were many video games for children, but we did not have any. But our children never complained about the lack of TV or electronic games in our house, because they followed us to live this sweet, joyful, and genuine church life which was already very rich, full, joyful, and satisfying. They did not care about the lack of TV or electronic products.

Our two children are very different, each has their own strengths. The younger one has a higher IQ and is very focused, often sitting quietly reading books and drawing pictures. The brothers and sisters that we served together all had children of similar ages, so we joined together to hire a teacher to teach the children to draw and paint. Every time we adults were up there serving in fellowship, the children were down there learning to draw; both were taken care of without any disruption. Later on, the younger one got into one of the best art colleges on the east coast.

Inserting a testimony, when the younger son was in elementary school, my husband was called by the Lord to serve Him full time. At that time, I was a little weak in faith, and the kids could see that. The younger one said, “Mom, don’t worry about my tuition; I can paint, and I’ll sell my paintings, and I’ll have tuition.” Then the older one said, “What about my tuition?” The younger one said, “That’s okay, I’ll sell a few more paintings and you’ll have your tuition too.” The children were all very simple and encouraged me.

The older son is of average intelligence and has a relatively average academic record. I was a little worried about what he would do if he fails to get into college. Most of all, I was worried about shaming the Lord’s name and testimony. I was afraid that someone would say, “Your family is serving the Lord, and as a result, your child can’t go to college!” Later, I discovered that there were many characteristics in the older child that the younger child or other children did not have. For example, he was extraordinarily generous, and he was also especially caring. When he was in high school, he went to the same high school with some brothers in the church. Every time after school, he would take them to the school gymnasium to play sports. After that, he would bring them to our home, prepare food and drink for them, and then lead them to read a chapter of the Bible before letting them go home.

He not only brought a number of brothers together, but also included a number of unbelievers from the school to the student Bible study meetings. These are traits that the younger son or other high achievers don’t have. I often compared him to the high achievers, but then, at his graduation, I changed my mind about him. He invited us to his graduation ceremony. When we went, we witnessed that he was the host of the graduation ceremony. He and another female student conducted the ceremony in an orderly manner. I was so surprised by the tone and manner of his speech that I couldn’t believe he was my son.

After the graduation ceremony, I asked him, “When did you learn to be a host? How did you do so well?” He said, “It’s nothing! Didn’t I always get up to prophesy in the meetings? I also often participated in student perfecting and conferences, usually with hundreds or thousands of people. The brothers let me lead the hymns and sharing, so I had many opportunities to practice and learn. Naturally, I had no problem hosting the graduation ceremony.” This showed me that there is no lack of any benefit in God’s family.

Verse of the Day

In Him was life, and the life was the light of men.